Last week we returned to El Limite with a few brave guests. A 2 day sportive with a 145km race on the Saturday followed on Sunday by the Pico de Veleta hill climb (highest road in Europe). As usual Granada was around 35 deg but humid with a thin cloud cover, which helped a lot in the end.
The start on Saturday was just outside of the city centre but returned straight back through the middle for 20 km before we hit the first climb and the end of the neutral zone. The first climb was quite a steady one but having ridden this sportive many times I know exactly what is needed for the final climb so rode fairly steady. The route was a really nice one on mainly very quiet country lanes winding through olive groves and passed a reservoir and a few pretty towns. The heat was really starting build towards the final climb and I was starting to pick of a few of the riders who had gambled and gone off hard. It was the best I have felt on the final climb for years so knew I had ridden it about right, the finish line was still a welcome sight though. All of our guests arrived soon after with eventual smiles on their faces after the shock of the final climb had been slightly forgotten. 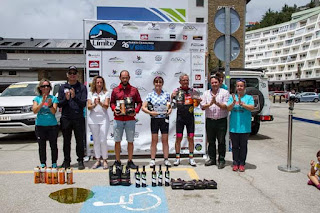 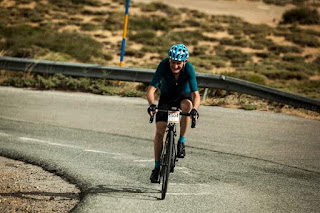 Sunday was the Pico Veleta climb but high winds meant the route was going to be shortened as has happened in the past. Normally the timed section is 36km but we were a good 14km short on the day. The winds were huge as predicted with 120kmh gusts at the very top and nearly unrideable conditions for the last couple of kms for us. But again we all made it even if we were a bit battered. As usual the food afterwards and the organisation was fantastic and we shall be returning for more of the same next year. 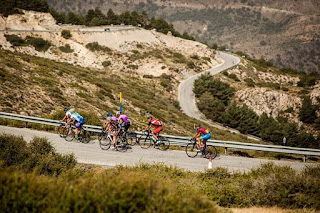 I've been going to this race for a few years with various success and bad luck. Now I'm in the master 50 I thought I would get myself trained up properly and have another go. It's a 4 day MTB stage race around various parts of Andalucia with a lot of climbing and luckily for me, enough technical single track that normally gives me a bit of an edge.
Day 1 was the usual fast start with the master 50s starting from the back of the field. One of my competitors was starting very well and cutting through the field so I had to go with him. I did my best to drop him but was caught on a long flat section and I just didn't have the legs to stay with him. I dropped off trying to recover but it never really happened and the last steep 8km climb really had me struggling. I ended up 2nd but lost 9 min, too much.
Day 2 I got on the wheel of 1st place and soon realized he was struggling with the technical sections, up and down. I made my move and tried to get away. I finished much stronger and waited as the time counted down, 12 mins, I was back in the lead.
Day 3 was the longest and had lots of technical sections, I rode flat out and took plenty of risks and got another 5 mins.
Day 4 I know well from previous years, 30 km up 30 km down. 2nd place attacked pretty hard on the start of the climb but I passed him on the 1st single track descent and didn't see him again. I rode hard to the finish with no problems and took the win. Very happy, we'll see what happens next year. 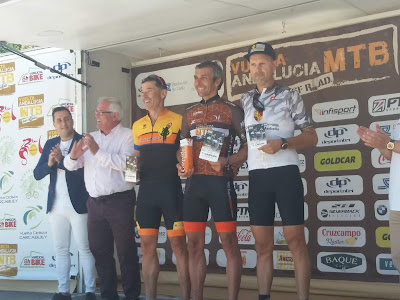 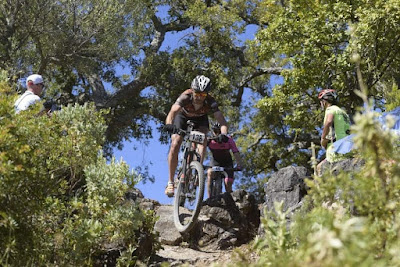 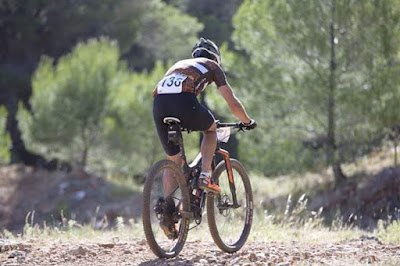 Myself and Ramon went to race in the Guad Al Xenil race last saturday. 143 km with 3200mts climbing around our local mountains starting in the Lecrin valley. After the neutral zone me and Ramon had strong start, maybe too strong, but sometimes you have to try. It took in two of our very steep climbs past the village of Notaez and the tough puerto de Torviscon, a steep 10 km to the top of the sierra Contraviesa. After that it was quite a fast run with a very fast drop down the cork forest on fully closed roads. From here on it was time to save the legs for the los Guajares climb, unfortunatly the wheels came off and I lost 4 places in my age group finishing 52 o/a and 8 th master 50. Here is the Strava link for the ride. 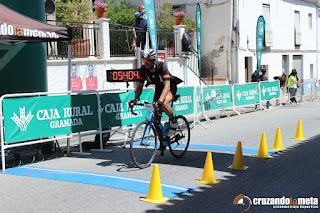 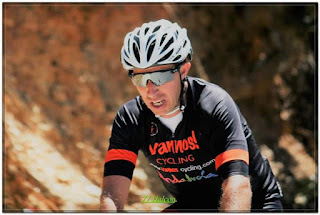 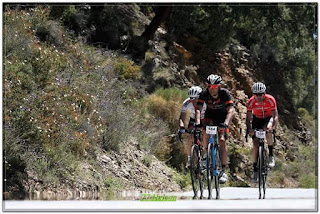 Starting just outside the small village of  Torviscon you first drop 1km into the river (to lose as much height as possible) The start of the climb starts off as a fairly constant gradient which allows for a good rhythm heading towards the pretty hillside village of Almegijar,

It is situated at over 800 metres above sea level, on the southern slopes of the Sierra Morena, a spur of Mulhacen, the highest mountain in Spain. Before the Spanish civil war in 1935, the church was burned by anarchists and during the war it was just behind the republican front lines; the remains of trenches can still be seen up the mountain. These trenches represents the furthest advance of the fascists into Las Alpujarras after they took Granada.

The people of the village still largely work on the land, often using mules. There are many olive groves (and an olive oil processing factory), almonds, oranges and lemons, along with vegetable gardens

but no time for views if you are going for a pb. Its time to start paying if you went off to hard as the hairpins keep coming passing the old mines (now only used for aggregates) eventually giving way to a small rest over a false summit. Make the most of the small rest as the last 2km has a couple of very steep bends and keeps a couple of surprises until the top. 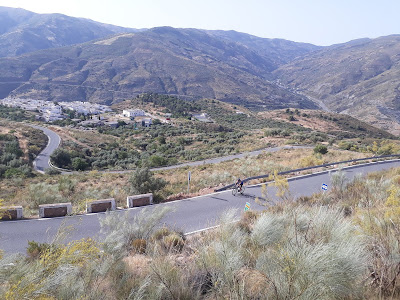 We have started running some early season camps down on the coast to guarantee the weather and give us and our regular guests a bit of a change. After trying a couple of places we have settled on Torre Del Mar, only 30 mins from Malaga airport with excellent climate and cycling. We are currently in the middle of our two weeks for this year and it has been excellent. We use a brilliant hotel on the seafront offering half board and the feedback has been great. Keep an eye on our website or join our newsletter for next years dates. 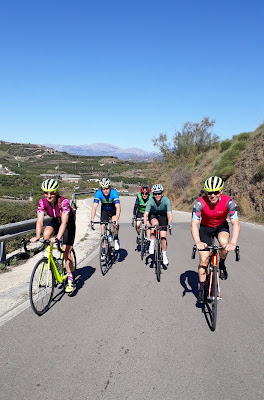 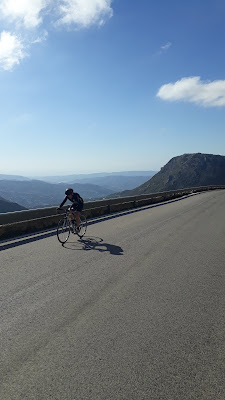 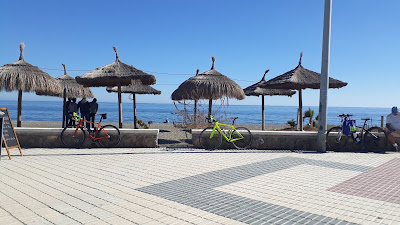 Last week I raced the 4 day Costa blanca bike race with my friend Tim. We have always raced well as a pair and had both trained hard for this. Day 1 was a frantic 40k  with the usual fast start but we got away well and hoped for a good position. I had a very rough patch half way round after coming back from the UK unwell, but we got the to finish and had 1st place master 50. 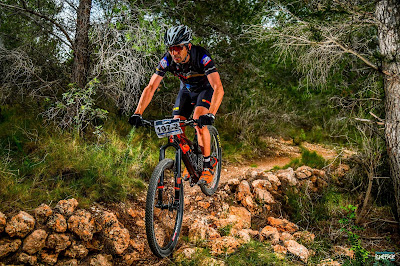 Day 2 was a 15km time trial which we were both quite nervous about because the finish had 1km with ramps up to 30%. If you are not strong on a day like that you could lose minutes. We rode fairly steady along the seafront towards the climb and rode well and ended up losing 1 second to the guys in 2nd place, nothing. 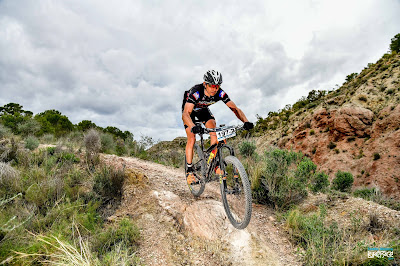 Day 3 was another shortish 40km but with 1600mts of climbing and we were both feeling good. The guys in 2nd went off hard straight away and faded quite quickly so we edged past and never saw them again, the best way to race. We carried on pushing hard and passing as many as we could on the single track and it payed off, we gained another 6 minutes. 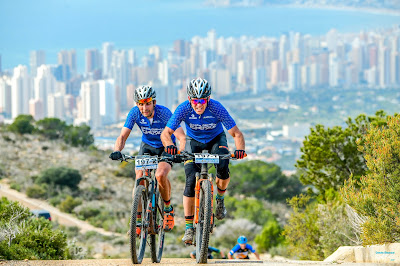 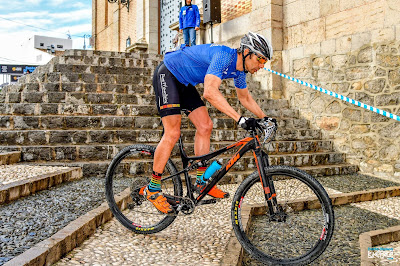 Day 4 was the longest at 57km and the profile looked quite tough. The guys in 2nd were still putting up a fight on the early single track  jams but wearing a leaders jersey gives you a much easier run through the traffic and we got away comfortably. There was some quite technical descending towards the end with both of us taking tumbles, more nerves than anything I guess. Once we passed the 10km to go marker we were rolling towards the finish line with the smiles starting to appear. We ended winning by around 20 mins, A perfect week where the training had really paid off and luck was on our side. Next year? 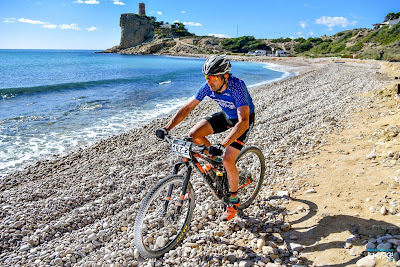 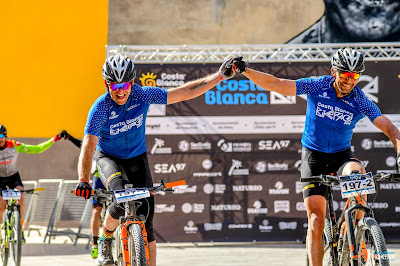 As we are normally quiet in January we have started lumping everyone together for our turkey burner week before we go down to the coast for Feb. We have all got some great riding done including a 168km epic we have only ridden a couple of times before . My training for the Costa blanca bike race is still in full swing so the hours came in very handy. Also the climb from the reservoir that we ride most weeks has been fully resurfaced so a PB this year is there for everyone to try. 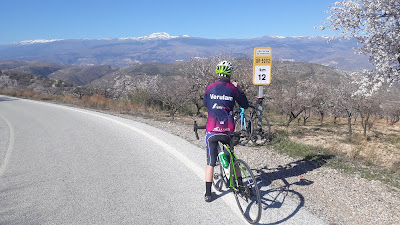 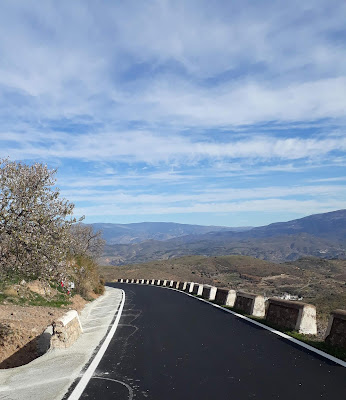 Last week we returned to El Limite with a few brave guests. A 2 day sportive with a 145km race on the Saturday followed on Sunday by the Pic...